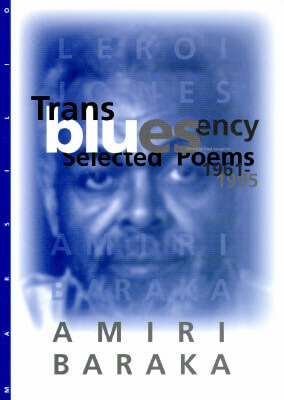 The poems selected here span from Baraka’s first collection, Preface to a Twenty Volume Suicide Note (1961), to the long poem Wise, Why’s, Y’z, published earlier this year [1995]. The best work here has been culled from his second and third books, The Dead Lecturer (1964) and Black Magic (1969). Despite coming out of distinct phases in Baraka’s life (the former when he was a book Beat, by the latter he’d become Black nationalist), these works combine the personal and political in highly charged ways. When Baraka writes of “the roaring harmonies of need” or of “stumbling over our souls in the dark, for the sake of unnatural advantage,” he succeeds as both an activist and a poet. However, as revolutionary politics increasingly intrude, Baraka seems largely to abandon the craft of poetry for the the broader strokes of diatribe and rant (“dont tell me shit about the tradition of slavemasters/ & henry james…”). However disappointing much of this later work may be, it is readily argued that Baraka’s influential work prefigured rap and the current vogue of spoken-word performances and poetry slams. This collection provides a useful overview of his work.

More books like Transbluesency: The Selected Poetry of Amiri Baraka (Leroi Jones) may be found by selecting the categories below:

Tell us what do you think about Transbluesency: The Selected Poetry of Amiri Baraka (Leroi Jones).