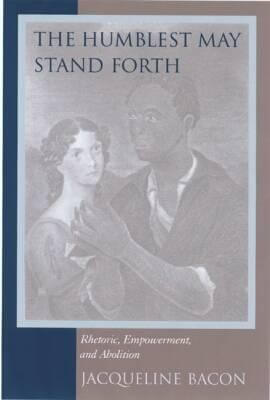 The Humblest May Stand Forth: Rhetoric, Empowerment, and Abolition (Studies in Rhetoric/Communication)
by Jacqueline Bacon

Book Description:Offering an alternative account of the abolitionist movement, The Humblest May Stand Forth analyzes the rhetoric of African Americans and white females involved in the crusade against slavery and examines the particular strategies they chose to advocate despite their positions at the periphery of the movement. Jacqueline Bacon explores how these activists, rather than surrender to a society intent on keeping them quiet, identified and employed rhetorical strategies that would advance their message. Bacon explores the sometimes unconventional methods, organizations, and media they created to fight slavery on their own terms. Drawing on such primary sources as letters, editorials, proslavery and antislavery tracts, and domestic manuals, Bacon probes antebellum notions of race and gender and the ways that these conceptions influenced the abolitionists’ arguments. She suggests that abolitionists marginalized by race and gender developed a diverse, empowering, and theoretically complex array of rhetorical strategies that must be analyzed on their own terms. Examing the words of individual activists, including the well-known figures Frederick Douglass and Angelina Grimke and the less familiar reformers William Whipper, Charles Leuox Remond, Maria Stewart, and Sarah Douglass, Bacon concludes that many marginalized abolitionists achieved a unique kind of agency at the same time they employed, in adapted form, strategies codified by twentieth-century rhetorical analysis.

More books like The Humblest May Stand Forth: Rhetoric, Empowerment, and Abolition (Studies in Rhetoric/Communication) may be found by selecting the categories below:

Tell us what do you think about The Humblest May Stand Forth: Rhetoric, Empowerment, and Abolition (Studies in Rhetoric/Communication).