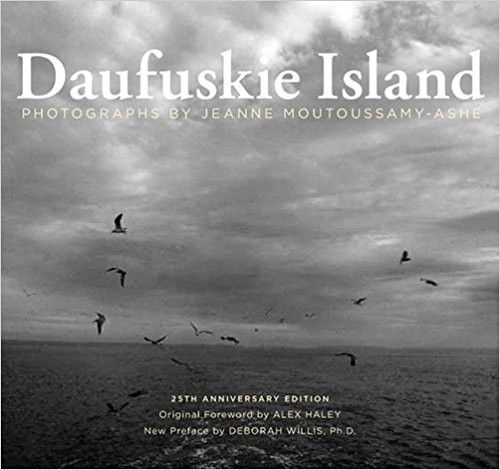 Paperback Description:
First published in 1982, Daufuskie Island vividly captured life on a South Carolina Sea Island before the arrival of resort culture through the photographs of Jeanne Moutoussamy-Ashe and words of Alex Haley. Located between Hilton Head and Savannah, Daufuskie Island has since become a plush resort destination. Moutoussamy-Ashe’s photographs document what daily life was like for the last inhabitants to occupy the land prior to the onset of tourist developments.When Moutoussamy-Ashe first came to Daufuskie in 1977, about eighty permanent African American residents lived on the island in fewer than fifty homes. Many of the people still spoke their native Gullah dialect. They had only one store, a two-room school, a nursery, and one active church. This represented all that remained of a once-thriving black society which developed after the original plantation owners left and the land was bought by freed slaves. After the boll weevil caused cotton crop failures and pollution ruined oyster beds, more and more residents sold their land to commercial developers. It became clear that Daufuskie would soon be transformed into a coastal resort like neighboring Hilton Head, changing forever the unique island culture that survived largely unchanged for the preceding half-century. Moustoussamy-Ashe’s photographs show family gatherings, crabbing and fishing, children at play, spiritual life, and the toils of everyday existence. With the utmost respect for her notoriously shy subjects, she captured a powerful vision of their rough-hewn but rewarding life independent from many modern conveniences.Redesigned from cover to cover, the twenty-fifth anniversary edition of Daufuskie Island includes more than fifty previously unpublished photographs from the original contact sheets, a new preface by Deborah Willis, and a new epilogue by Moutoussamy-Ashe.

More books like Daufuskie Island: 25th Anniversary Edition may be found by selecting the categories below: