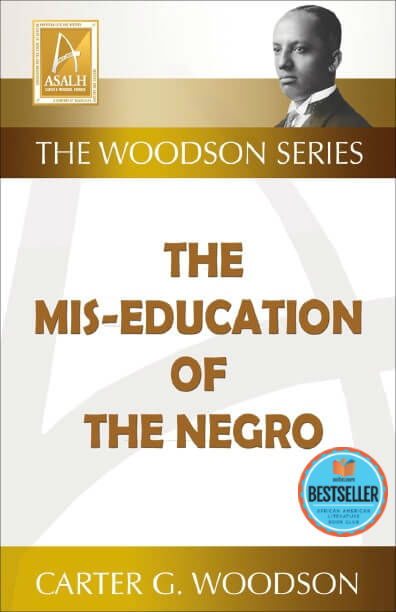 The Mis-Education of the Negro
by Carter G. Woodson

Black Classic Press, in partnership with the Association for the Study of African American Life and History (ASALH,) announces the launch of The Woodson Series, which recognizes the pioneering efforts of Carter G. Woodson, The father of Black History Month, as a publisher and institution builder. (Read More ▶)

When you control a man’s thinking you do not have to worry about his actions. You do not have to tell him not to stand here or go yonder. He will find his “proper place” and will stay in it. You do not need to send him to the back door. He will go without being told. In fact, if there is no back door, he will cut one for his special benefit. His education makes it necessary.

The oppressor has always indoctrinated the weak with his interpretation of the crimes of the strong.”

Originally published in 1933, Mis-Education of the Negro is considered Woodson’s seminal work. This text explores his thesis that African Americans were being culturally indoctrinated, rather than taught, in American schools. He asserts that this conditioning caused African-Americans to become dependent and to seek out inferior places in the greater society of which they were a part. Woodson skillfully exposes the weaknesses of Euro-centric based curriculums that failed to include African American history and culture.