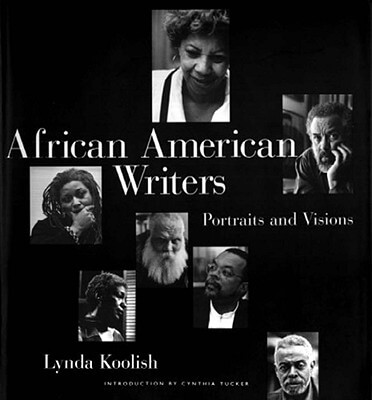 Author and Photographer Lynda Koolish discusses the writers in her book with John A Williams, author and subject, Troy Johnson, founder AALBC.com, and Wilfred Samuels, professor, University of Utah, at the exhibition opening and book celebration for African American Writers Portraits and Visions, held at the Schomberg Center for Research in Black Culture

Over a period of thirty years Lynda Koolish has been photographing African American authors in their homes, at public readings, in universities, and at conferences and festivals.

As this volume of her photographs presents the faces of acclaimed African American writers, it also highlights the diversity within African American literature and celebrates the many genres it explores. Koolish includes authors of diverse identities—Caribbean writers who have immigrated to the United States, writers of mixed heritage, writers who proudly proclaim their African roots, playwrights, poets, novelists, critics, scholars, short story writers, oral storytellers, and memoirists.

Koolish’s photographs convey a sense of clarity, warmth, and beauty. Along with each portrait she provides a short biographical essay that comprises the artistic vision of the author. Her superb gallery of fifty-nine black-and-white photographs presents a grand assembly.

"We know these authors," Cynthia Tucker says. "We know their words. We can quote favorite passages from their essays, their poems, their novels. Yet we have rarely seen their faces. We have rarely seen them reading their works, talking to audiences, explaining their views. We know some important part of them but cannot attach to it a pair of eyes, a furrowed brow, a head full of dreadlocks. Now we can look at the eyes that see so much, that transform our understanding of the world. And we can look for, even if we cannot hope to find, the source of their genius."

This is the first book devoted exclusively to photographic portraits of African American writers since Carl Van Vechten’s work featuring Harlem Renaissance writers in the 1920s and 1930s.

Lynda Koolish, a scholar of African American literature, is an associate professor of English and comparative literature at San Diego State University. She is well known also as a professional photographer whose work has appeared in the New York Times, Belles Lettres, Poetry Flash, and Modern Fiction Studies. Her photography has been featured in many exhibitions, including the 1994 juried show at the Cork Gallery in the Lincoln Center for the Performing Arts and in Celebrating Women Writers, a calendar published by the New York Public Library in 1999. Cynthia Tucker is a syndicated columnist at the Atlanta Constitution and a regularly featured commentator on PBS’s The News Hour with Jim Lehrer.

Books similiar to African American Writers: Portraits and Visions may be found in the categories below: