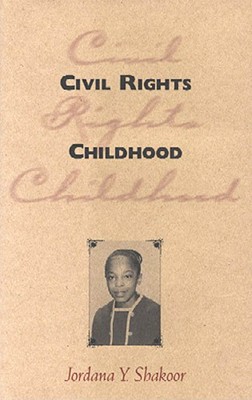 Paperback Description:
Two voices blend in this poignant memoir from the Civil Rights era in Mississippi—a father’s and a daughter’s. He was Andrew L. Jordan, a son in a dirt-poor family of sharecroppers near Greenwood. Jordana Shakoor is his little girl who grew up to write this book. In her southern childhood she is just becoming aware of her people’s dreadful predicament of loving their homeland but of hating its mistreatment of blacks. Like virtually all other southern black families, the Jordans endured humiliation and fear of white reprisals.The child states that her father rejected the ugly Jim Crow tradition and aimed at achieving an improbable dream in black Mississippi—to become a schoolteacher. First, he served as a "colored soldier" in the armed forces. Then he returned home to marry in 1955, an especially ominous year in the calendar of black southerners (the heinous murder of the black northern teenager Emmett Till occurred then). Jordan got his education with aid from the GI Bill and realized his dream of teaching. But it wasn’t enough. Beginning to live according to his conscience, he joined his life to the Civil Rights Movement. At first he moved behind the scenes and then worked openly in mass meetings and voter registrations. For his activism he lost his job and, unemployable at home, he was driven from Mississippi.In Ohio his family merged into the American middle class. When the daughter was twelve, Jordan let her read his fascinating memoir. It made her proud. When she was thirty-five, her father died. By the time she was forty she had begun to intertwine their two stories and their two voices. In a loving reminiscence of her childhood and family influences in Mississippi during a time of danger and strife Civil Rights Childhood unites their two lives and their histories.The voices in this book tell a story whose theme is familiar to legions of African Americans. Yet its particular voices, until now, have gone unheard. Though this is told by a child born in the segregated South, it also is the story of her family’s triumph over a dark heritage, a story of a Civil Rights childhood that casts away a centuries-old tradition of insult and denial to embrace instead a Civil Rights heritage of freedom and love.

More books like Civil Rights Childhood may be found by selecting the categories below: