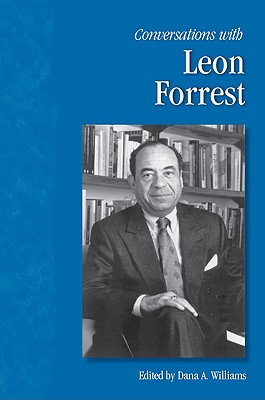 Paperback Description:
Leon Forrest (1937-1997) was among the most innovative and ambitious African American fiction writers of the twentieth century. His books-which include novels There Is a Tree More Ancient than Eden, Divine Days, The Bloodworth Orphans, and Two Wings to Veil My Face, and the posthumously published novella Meteor in the Madhouse-fused classical mythology, realism, and African American history and culture. Largely set in his native Chicago, Forrest’s novels comprise an oeuvre of powerful urban modernism. Conversations with Leon Forrest collects interviews ranging from 1975 to 1997. Forrest discusses his literary influences (William Faulkner, Fyodor Dostoevsky, Thomas Hardy, Dylan Thomas), the significance of both Catholicism and Baptist impulses in his writing, and the intersection between politics and aesthetics in black literature and culture. Music-jazz, folk, blues, and gospel-also played an im-portant role in developing Forrest’s aesthetic. Throughout the collection, Forrest’s wit, erudition, and candor are evident. His moral concerns, disciplined work ethic, and stylis-tic invention are explored. Conversations with Leon Forrest is a valuable introduction to a writer who was recognized as a literary genius by Ralph Ellison and Toni Morrison. Dana A. Williams is associate professor of African American literature at Howard University. She is the author of "In the Light of Likeness-Transformed": The Literary Art of Leon Forrest and, with Sandra Shannon, the editor of August Wilson and Black Aesthetics.

More books like Conversations with Leon Forrest (Literary Conversations) may be found by selecting the categories below: