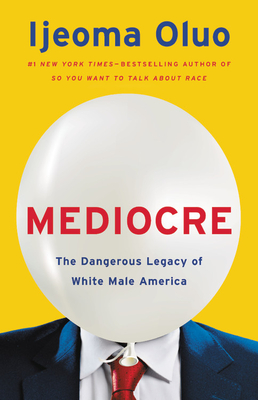 The publication of So You Want to Talk About Race in 2018, the #1 New York Times Bestseller with more than 500,000 copies in print, resulted in Seattle-based author Ijeoma Oluo emerging as a leading commentator and expert on racial justice issues. In the book, Oluo identifies white male supremacy as “America’s oldest pyramid scheme.” White Southern elites assured poor white men that, despite being bit players in a system of oppression from which they reaped very little financial reward, they would always have more power and status than women or people of color. But that notion wasn’t unique to the South. And more than two hundred years later, Oluo argues, the tragic bargain exerts deadly force. The only way to break free is to understand what we’re up against.

It’s precisely why Oluo was compelled to write her new book, Mediocre: The Dangerous Legacy of White Male America, which traces the through lines of White male supremacy and the havoc it has wreaked on this country and our people for generations. In devastating example after example, from the mythical “Buffalo Bill” Cody and the destruction of the actual buffalo and Indigenous communities, through the Great Migration and the Great Depression, right up through the current state of higher education, housing policy, electoral politics, and even professional sports, Oluo shows how White male supremacy has shaped—and continues to shape—our lives.

Our society has historically conditioned White men to derive self-worth from a feeling of superiority over others—regardless of their level of skill or talent. People of color are the most severely impacted, as the news cycle continues to teach us. But Oluo shows how White male supremacy harms everyone, except for the wealthiest, most powerful of white men. And while powerful white men designed these systems to maintain a stranglehold on wealth and power, we are all complicit to varying degrees, depending on our level of racial, gender, and socioeconomic privilege.

In Mediocre, however, Oluo shares that there is good news in that we have the power to create new, better systems—through our wallets, our votes, and our refusal to play by traditional rules that privilege arrogance and aggression over collaboration and community. As Oluo writes:

Books similiar to Mediocre: The Dangerous Legacy of White Male America may be found in the categories below: