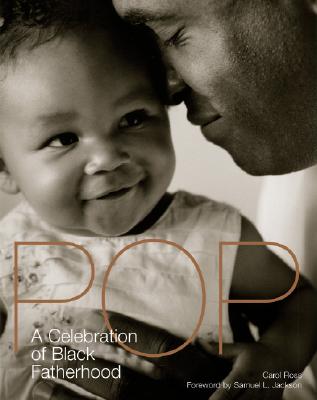 Pop: A Celebration of Black Fatherhood
by Carol Ross

Ross’s richly textured duotone photographs reveal a group of devoted fathers whose common bond is their profound love for their children. For her subjects, Ross has selected men from all walks of lifecollege professors, filmmakers, technicians, construction workers, and corporate executivesalong with well-known music executives, directors, entertainers, and actors, such as Antonio L. A. Reid, Ruben Santiago-Hudson, Funk Master Flex, Doug E. Doug, and Melvin Van Peebles. Film star Samuel L. Jackson, photographed with his daughter, provides the book’s foreword, and each portrait is accompanied by a poignant personal recollection by the father depicted.

Exquisitely designed, Pop: A Celebration of Black Fatherhood finally gives black men their own voice about their experience as fathers. Inspired by her own father, Ross’s book is, in her words, “a round of applause, a bow, a ‘God bless you,’ ” to all those fathers who “take their children to that place where, one day, they can fly on their own.”

Books similiar to Pop: A Celebration of Black Fatherhood may be found in the categories below: