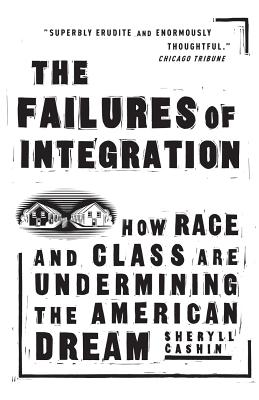 The Failures of Integration (Paperback): How Race and Class Are Undermining the American Dream_
by Sheryll Cashin

On May 17, 1954, the Supreme Court unanimously declared that separate educational facilities for blacks and whites are inherently "unequal" and, as such, violate the 14th Amendment. The landmark decision, Brown v. Board of Education, sounded the death knell for legal segregation, but fifty years later, de facto segregation in America thrives. And Sheryll Cashin believes that it is getting worse.

The Failures of Integration is a provocative look at how segregation by race and class is ruining American democracy. Only a small minority of the affluent are truly living the American Dream, complete with attractive, job-rich suburbs, reasonably low taxes, good public schools, and little violent crime. For the remaining majority of Americans, segregation comes with stratospheric costs. In a society that sets up "winner" and "loser" communities and schools defined by race and class, racial minorities in particular are locked out of the "winner" column. African-Americans bear the heaviest burden. But with the expensive price tag attached to "winner" communities, middle-income whites also struggle to afford homes in good neighborhoods with acceptable schools.

What’s worse is that we’ve come to accept our segregated society. Most whites have bought into the psychology of the bulwark: the idea that separating themselves from different races and classes is the only sure route to better opportunity. African-Americans, on the other hand, have become integration weary. Many escape to affluent all-black enclaves in hopes of thriving among their own, even as they attempt to insulate themselves from their less advantaged brothers and sisters. Sheryll Cashin shows why this separation is not working for most Americans.

In a rapidly diversifying America, Cashin argues, we need a radical transformation-a jettisoning of the now ingrained assumption that separation is acceptable-in order to solve the riddle of inequality. Our public policy choices must be premised on an integrationist vision if we are to achieve our highest aspiration and pursue the dream that America says it embraces: full and equal opportunity for all.