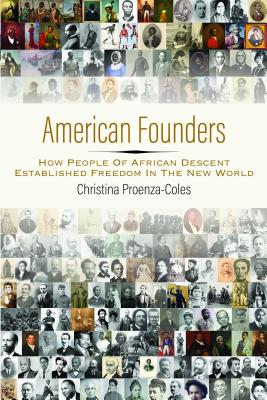 American Founders: How People of African Descent Established Freedom in the New World
by Christina Proenza-Coles

Book Description:
American Founders reveals men and women of African descent as key protagonists in the story of American democracy. It chronicles how black people developed and defended New World settlements, undermined slavery, and championed freedom throughout the hemisphere from the sixteenth thorough the twentieth centuries. While conventional history tends to reduce the roles of African Americans to antebellum slavery and the civil rights movement, in reality African residents preceded the English by a century and arrived in the Americas in numbers that far exceeded European migrants up until 1820. Afro-Americans were omnipresent in the founding and advancement of the Americas, and recurrently outnumbered Europeans at many times and places, from colonial Peru to antebellum Virginia. African-descended people contributed to every facet of American history as explorers, conquistadores, settlers, soldiers, sailors, servants, slaves, rebels, leaders, lawyers, litigants, laborers, artisans, artists, activists, translators, teachers, doctors, nurses, inventors, investors, merchants, mathematicians, scientists, scholars, engineers, entrepreneurs, generals, cowboys, pirates, professors, politicians, priests, poets, and presidents. The multitude of events and mixed-race individuals included in the book underscores that black and white Americans share the same history, and in many cases, the same ancestry. American Founders is meant to celebrate this shared heritage and strengthen these bonds.

More books like American Founders: How People of African Descent Established Freedom in the New World may be found by selecting the categories below:

Tell us what do you think about American Founders: How People of African Descent Established Freedom in the New World.