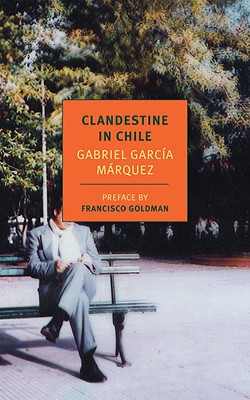 Clandestine in Chile: The Adventures of Miguel Littin
by Gabriel Garcia Marquez

Paperback Description:
In 1973, the film director Miguel Litt n fled Chile after a U.S.-supported military coup toppled the democratically elected socialist government of Salvador Allende. The new dictator, General Augusto Pinochet, instituted a reign of terror and turned Chile into a laboratory to test the poisonous prescriptions of the American economist Milton Friedman. In 1985, Litt n returned to Chile disguised as a Uruguayan businessman. He was desperate to see the homeland he’d been exiled from for so many years; he also meant to pull off a very tricky stunt: with the help of three film crews from three different countries, each supposedly busy making a movie to promote tourism, he would secretly put together a film that would tell the truth about Pinochet’s benighted Chile—a film that would capture the world’s attention while landing the general and his secret police with a very visible black eye.

Afterwards, the great novelist Gabriel Garc a M rquez sat down with Litt n to hear the story of his escapade, with all its scary, comic, and not-a-little surreal ups and downs. Then, applying the same unequaled gifts that had already gained him a Nobel Prize, Garc a M rquez wrote it down. Clandestine in Chile is a true-life adventure story and a classic of modern reportage.

More books like Clandestine in Chile: The Adventures of Miguel Littin may be found by selecting the categories below: