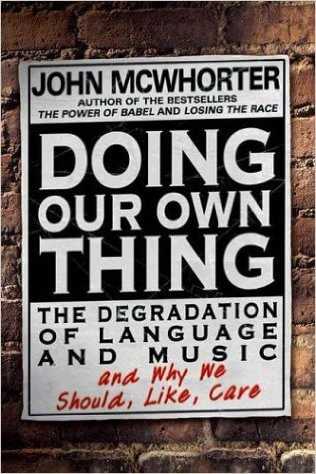 Doing Our Own Thing: The Degradation Of Language And Music And Why We Should, Like, Care
by John McWhorter

Hardcover Description:
A rousing polemic in defense of the written word by the New York Times bestselling author of Losing the Race and the widely acclaimed history of language The Power of Babel.

Critically acclaimed linguist John McWhorter has devoted his career to exploring the evolution of language. He has often argued that language change is inevitable and in general culturally neutral-languages change rapidly even in indigenous cultures where traditions perpetuate; and among modernized peoples, culture endures despite linguistic shifts. But in his provocative new book, Doing Our Own Thing, McWhorter draws the line when it comes to how cultural change is turning the English language upside down in America today, and how public English is being overwhelmed by street English, with serious consequences for our writing, our music, and our society.

McWhorter explores the triumph of casual over formal speech-particularly since the dawn of 1960s counterculture-and its effect on Americans’ ability to write, read, critique, argue, and imagine. In the face of this growing rift between written English and spoken English, the intricate vocabularies and syntactic roadmaps of our language appear to be slipping away, eroding our intellectual and artistic capacities. He argues that "our increasing alienation from ’written language’ signals a gutting of our intellectual powers, our self-regard as a nation, and thus our very substance as a people."

Timely, thought-provoking, and compellingly written, Doing Our Own Thing is sure to stoke many debates about the fate of our threatened intellectual culture, and the destiny of our democracy.

More books like Doing Our Own Thing: The Degradation Of Language And Music And Why We Should, Like, Care may be found by selecting the categories below: