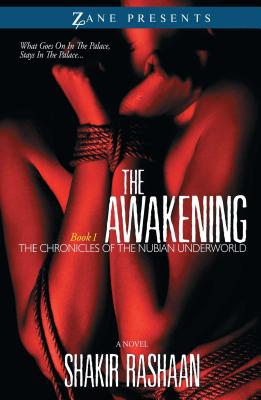 The Awakening: Book One of the Chronicles of the Nubian Underworld
by Shakir Rashaan

Book Description:
An erotically charged journey inside Atlanta’s African-American Fetish/BDSM community. The first in the series revolves around an African-American dominant couple, Ramesses and Neferterri, and their submissives, told in a conversational style.
"What goes on in the Palace, stays in the Palace…"

Life seems well within the "Nubian Underworld" of the ATL, as Ramesses, his wife Neferterri, and their submissives are at the center of what can only be described as "paradise" by those who have seen the debauchery within. Amenhotep, Ramesses’ mentor, is on the verge of bringing in his newest slave to reside with him at the Palace, and the entire community has been invited to witness the decadence of the grounds and the libidinous nature of the guests in attendance.

Unfortunately, life is not always a bed of roses… sometimes the thorns must be felt.

All hell breaks loose when Ramesses and Neferterri begin losing their submissives for a variety of reasons, and Amenhotep gets caught up in a sting operation that makes the local news and threatens to blow the lid off of the Atlanta Fetish community that thrives on the anonymity that is enjoyed by all. Despite it all, everyone in the circle is there for one another, no matter the consequences.

The Awakening: Book One of the Chronicles of the Nubian Underworld is a journey inside Atlanta’s African-American Fetish/BDSM community, and the ties that bind the principal players of this exciting new series. With its twists and turns and surprises along the way, it is sure to become an "awakening" for any who dare to journey to the "Dark side."

More books like The Awakening: Book One of the Chronicles of the Nubian Underworld may be found by selecting the categories below:

Tell us what do you think about The Awakening: Book One of the Chronicles of the Nubian Underworld.