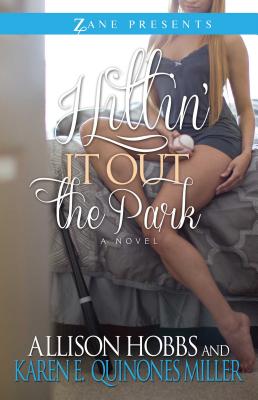 Hittin’ It Out The Park
by Allison Hobbs and Karen E. Quinones Miller

Book Description:
Secrets abound in this scintillating, drama-fuelled novel about a love triangle between a multi-millionaire baseball star, his wife, and the groupie who’s trying to ruin their marriage—if a long-held secret doesn’t destroy it first.

Cheryl Blanton is married to a superstar baseball player who has won three Gold Gloves and recently signed a $120 million, five-year contract with the New York Yankees. He’s wealthy and handsome, and all the groupies are after him, but Cheryl is gorgeous and her sex game has her man on lock. There’s just one little secret she’s been keeping from him: her husband doesn’t realize that she’s nine years his senior. And so far Cheryl’s had no problem hiding her age—her husband only has eyes for her. That is, until twenty-one-year-old Sexy Sanchez comes on the scene.

Sexy blatantly goes after Cheryl’s man, and a series of catfights ensue between them. Cheryl realizes she’s in the battle of her life to keep her man and plots to get rid of her nemesis. But when she hires a private investigator to dig up some dirt on Sexy, she discovers that getting rid of her rival might not be easy, and could also reveal some devastating secrets she’d rather keep to herself…

More books like Hittin’ It Out The Park may be found by selecting the categories below: