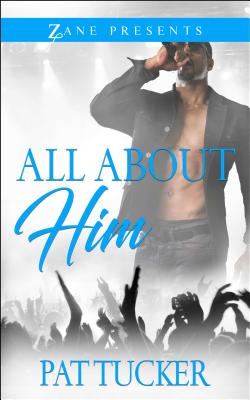 All About Him: A Novel
by Pat Tucker

Book Description:
A scorned woman is determined to expose her ex-lover for the cruel man he is but she has her work cut out for her since he is a globally beloved singer. Will she get her revenge or lose everything? This suspenseful and steamy novel is perfect for fans of Zane and ReShonda Tate Billingsley.

Felicia Spears is the epitome of a woman scorned. Nothing is right in her life since her ex left, and she blames him for all of her misery. It may have been three years since Cooper walked out and left her destitute, but it feels like it was just yesterday. Now that Cooper is a big singing sensation, he’s riding his newfound fame all the way to the top with his second wife, Evelyn, planted firmly by his side.

Felicia has every right to be bitter and angry. In the early days, she made incredible sacrifices to help ensure Cooper’s success. And it seemed the moment his star began to rise, Felicia was replaced. Now, she’s hell-bent on getting what she feels she deserves, especially since that means tearing down Cooper’s new life.

Now at her lowest point, she’s determined to take matters into her own hands. She’ll let the world know Cooper isn’t the perfect man as his songs lead many to believe he is—and finally get her revenge.

More books like All About Him: A Novel may be found by selecting the categories below: