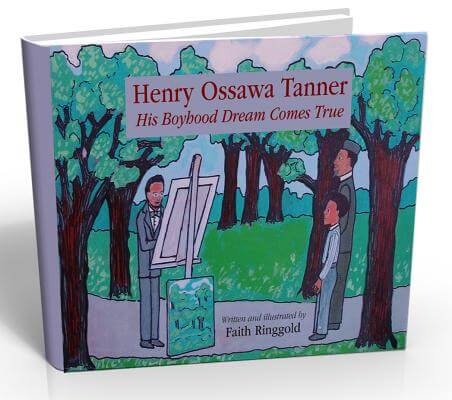 Hardcover Description:
This is the story of a small African American boy who followed his dream and became one of America’s most important painters, recognized and praised in both America and Europe. When he was just thirteen years old, Henry ran across a man painting in a Philadelphia park. Inspired to paint himself, Henry was given enough money to buy some brushes and pigments by his mother—and so his adventure began. Henry Ossawa Tanner was no ordinary young man. He was born in 1859, just two years before the Civil War began. His middle name, Ossawa, was taken from the town of Osawatomie in Kansas, the site of an anti-slavery raid. The oldest of seven children, Henry graduated from one of the few secondary schools for Black people in Philadelphia before studying under Thomas Eakins at the Pennsylvania Academy of the Fine Arts. Later he went to France, where he had heard Black artists were accepted without prejudice. Indeed, not only were his paintings exhibited every year in the Paris Salon but in 1923, he was made a chevalier of the Order of the Legion of Honor, France’s highest award for an artist. Henry Ossawa Tanner: His Boyhood Dreams Come True is Faith Ringgold’s fifteenth book for children. Her illustrations capture all the joy and passion of her previous stories—including Tar Beach, which has won more than thirty awards, including a Caldecott Honor and the Coretta Scott King Award.

More books like Henry Ossawa Tanner: His Boyhood Dream Comes True may be found by selecting the categories below: