Interventions: A Life in War and Peace by Kofi Annan 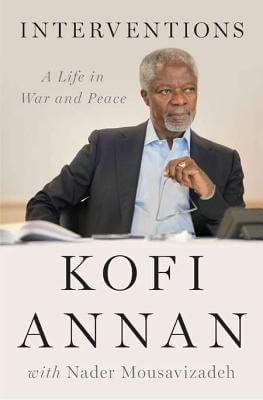 Interventions: A Life in War and Peace
by Kofi Annan

No one ever came closer to being the voice of “we the peoples” and no one paid a higher price for it. The world still needs such a voice, but the next person who tries to fill that role will want to reflect long and hard on the lessons of this candid, courageous, and unsparing memoir."" --Michael Ignatieff, The New York Review of Books

Receiving the Nobel Peace Prize in December 2001, United Nations Secretary-General Kofi Annan spoke to a world still reeling from the terrorist attacks of September 11. “Ladies and Gentlemen,” proclaimed Annan, “we have entered the third millennium through a gate of fire. If today, after the horror of 11 September, we see better, and we see further we will realize that humanity is indivisible. New threats make no distinction between races, nations, or regions.” Yet within only a few years the world was more divided than ever polarized by the American invasion of Iraq, the Arab-Israeli conflict, the escalating civil wars in Africa, and the rising influence of China.

Interventions: A Life in War and Peace is the story of Annan’s remarkable time at the center of the world stage. After forty years of service at the United Nations, Annan shares here his unique experiences during the terrorist attacks of September 11; the American invasions of Iraq and Afghanistan; the war between Israel, Hizbollah, and Lebanon; the brutal conflicts of Somalia, Rwanda, and Bosnia; and the geopolitical transformations following the end of the Cold War. With eloquence and unprecedented candor, Interventions finally reveals Annan’s unique role and unparalleled perspective on decades of global politics.

The first sub-Saharan African to hold the position of Secretary-General, Annan has led an extraordinary life in his own right. His idealism and personal politics were forged in the Ghanaian independence movement of his adolescence, when all of Africa seemed to be rising as one to demand self-determination. Schooled in Africa, Europe, and the United States, Annan ultimately joined the United Nations in Geneva at the lowest professional level in the still young organization. Annan rose rapidly through the ranks and was by the end of the Cold War prominently placed in the dramatically changing department of peacekeeping operations. His stories of Presidents Clinton and Bush, dictators like Saddam Hussein and Robert Mugabe, and public figures of all stripes contrast powerfully with Annan’s descriptions of the courage and decency of ordinary people everywhere struggling for a new and better world. Showing the successes of the United Nations, Annan also reveals the organization’s missed opportunities and ongoing challenges inaction in the Rwanda genocide, continuing violence between Israelis and Palestinians, and the endurance of endemic poverty. Yet Annan’s great strength in this book is his ability to embed these tragedies within the context of global politics, demonstrating how, time and again, the nations of the world have retreated from the UN’s founding purpose. From the pinnacle of global politics, Annan made it his purpose to put the individual at the center of every mission for peace and prosperity.

A personal biography of global statecraft, Annan’s Interventions is as much a memoir as a guide to world order past, present, and future.

More books like Interventions: A Life in War and Peace may be found by selecting the categories below: