When The Thrill Is Gone (Leonid Mcgill) by Walter Mosley 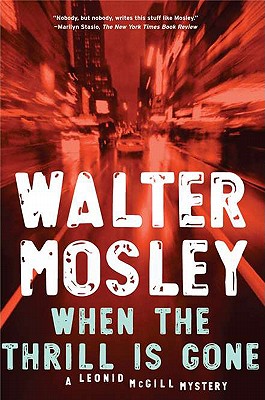 When The Thrill Is Gone (Leonid Mcgill)
by Walter Mosley

Book Description:
Leonid McGill is back, in the third-and most enthralling and ambitious-installment in Walter Mosley’s latest New York Times- bestselling series.

The economy has hit the private-investigator business hard, even for the detective designated as "a more than worthy successor to Philip Marlowe" (The Boston Globe) and "the perfect heir to Easy Rawlins" (Toronto Globe and Mail). Lately, Leonid McGill is getting job offers only from the criminals he’s worked so hard to leave behind. Meanwhile, his life grows ever more complicated: his favorite stepson, Twill, drops out of school for mysteriously lucrative pursuits; his best friend, Gordo, is diagnosed with cancer and is living on Leonid’s couch; his wife takes a new lover, infuriating the old one and endangering the McGill family; and Leonid’s girlfriend, Aura, is back but intent on some serious conversations…

So how can he say no to the beautiful young woman who walks into his office with a stack of cash? She’s an artist, she tells him, who’s escaped from poverty via marriage to a rich collector who keeps her on a stipend. But she says she fears for her life, and needs Leonid’s help. Though Leonid knows better than to believe every word, this isn’t a job he can afford to turn away, even as he senses that-if his family’s misadventures don’t kill him first-sorting out the woman’s crooked tale will bring him straight to death’s door.

More books like When The Thrill Is Gone (Leonid Mcgill) may be found by selecting the categories below: