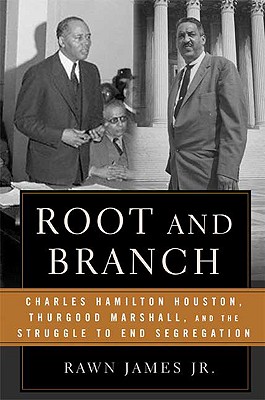 Book Description:
The riveting story of the two crusading lawyers who led the legal battle to end segregation, one case and one courtroom at a time. The Supreme Court’s decision in Brown v. Board of Education is widely considered a seminal point in the battle to end segregation, but it was in fact the culmination of a decades-long legal campaign. Root and Branch is the epic story of the two fiercely dedicated lawyers who led the fight from county courthouses to the marble halls of the Supreme Court, and, in the process, laid the legal foundations of the civil rights movement. Charles Hamilton Houston was the pioneer: After becoming the first African-American on the Harvard Law Review, he transformed the law school at all-black Howard University into a West Point for civil rights advocacy. One of Houston’s students at Howard was a brash young man named Thurgood Marshall. Soon after Marshall’s graduation, Houston and Marshall opened the NAACP’s legal office. The abstemious, proper Houston and the folksy, easygoing Marshall made an unlikely duo, but together they faced down angry Southern mobs, negotiated with presidents and senators, and convinced even racist judges and juries that the Constitution demanded equal justice under law for all American citizens. Houston, tragically, would die before his strategy came to fruition in the Brown suit, but Marshall would argue the case victoriously and go on to become the first African-American Supreme Court justice—always crediting his mentor for teaching him everything he knew. Together, the two advocates changed the course of American history.

More books like Root and Branch: Charles Hamilton Houston, Thurgood Marshall, and the Struggle to End Segregation may be found by selecting the categories below:

Tell us what do you think about Root and Branch: Charles Hamilton Houston, Thurgood Marshall, and the Struggle to End Segregation.