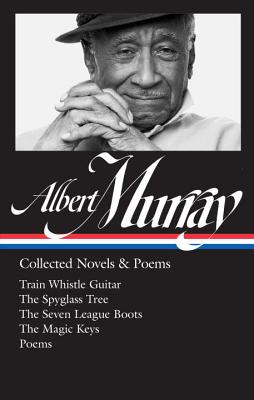 Hardcover Description:
Complete in one volume for the first time, the joyous, jazz-saturated fiction of one of our foremost African American writers, including the four-novel Scooter sequence

One of the leading cultural critics of his generation, Albert Murray was also the author of an extraordinary quartet of semi-autobiographical novels, vivid impressionistic portraits of black life in the Deep South in the 1920s and ’30s and in prewar New York City. Train Whistle Guitar (1974) introduces Murray’s recurring narrator and protagonist, Scooter, a "Southern jackrabbit raised in a briarpatch" too nimble ever to receive a scratch. Scooter’s education in books, music, and the blue-steel bent-note blues-ballad realities of American life continues in The Spyglass Tree (1991), Murray’s "Portrait of the Artist as a Tuskegee Undergraduate." The Seven League Boots (1996) follows Scooter as he becomes a bass player in a touring band not unlike Duke Ellington’s, and The Magic Keys (2005), in which Scooter at last finds his true vocation as a writer in Greenwich Village, is an elegaic reverie on an artist’s life. Editors Henry Louis Gates Jr. and Paul Devlin round out the volume with a selection of Murray’s remarkable poems, including 11 unpublished pieces from his notebooks, and two rare examples of his work as a short story writer.

More books like Albert Murray: Collected Novels & Poems: Train Whistle Guitar / The Spyglass Tree / The Seven League Boots / The Magic Keys/ Poems (The Library of America) may be found by selecting the categories below: