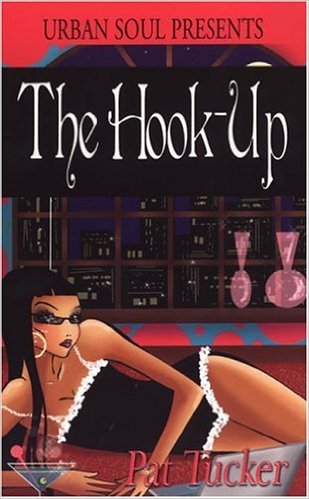 The Hook Up
by Pat Tucker

Book Description:
If all of the good men are gay, married or in jail… just how far would women go to get one? Frankie figured they’d dig deep into their knock off Prada bags-and she was right! Frankie Brown needs a serious hustle to get her out of the hood or at least allow her to live Hood Rich…After several failed attempts she finally strikes Gold with her new business: The Hook Up… it’s a unique dating service that finds the man of your dreams—but there’s just one catch… Your future Mr. Right may be on lock down. Despite this, Frankie is hooking up the ladies left and right. Women like Yvette, who’s flying solo after she catches her man cheating with three other women. Then there’s Carmen who was just about to bust her man creeping with his baby’s momma, when he was gunned down in a drive by. And Vicki-the white girl everyone loves to hate—simply has a thing for thugs and wants to find them any way she can. Who says there’d be no war if women ran things? The Hook Up is a fast-paced, drama filled urban tale that’s sure to please those who can relate to keeping it real. With the streets of South Central Los Angeles, Compton, and Watts as a backdrop for a ruthless tug of war over money, power, and revenge, these fierce females are about to set it off!

More books like The Hook Up may be found by selecting the categories below:

Tell us what do you think about The Hook Up.