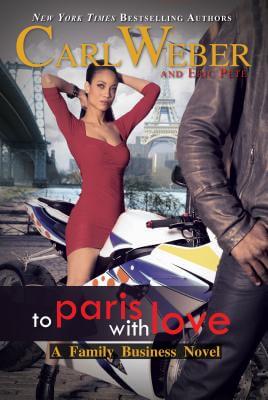 To Paris with Love: A Family Business Novel
by Carl Weber and Eric Pete

Book Description:
Ripped from the pages of the New York Times bestselling series The Family Business, Carl Weber and Eric Pete bring you To Paris with Love, a solo story about their two most popular characters to date—the bright, sexy, and deadly Paris Duncan and her flamboyant and cunning twin brother, Rio.

It’s spring break and Paris Duncan is on the verge of graduating at the top of her class from Chi’s Finishing School, one of Europe’s most exclusive private academies. At Chi’s students not only learn the three Rs, but they also learn the deadly art of assassination.
Like most of her classmates, Paris is looking forward to going back home. She can’t wait to get back to the bright lights of New York City, where she plans on clubbing with her twin brother Rio, scarfing down her mom’s cooking, and wearing out her father’s credit cards. A family crisis puts an end to her trip home in favor of a solo trip to the French Riviera.
Rio Duncan has been accepted into one of the most prestigious law schools in the country and his father, LC Duncan, couldn’t be more proud of him. Unfortunately for LC, Rio has plans of his own, and they don’t include law school. If that weren’t surprise enough, Rio’s got a few more things to tell his dear old dad, one of which is that he is gay.
Now that he’s come out of the closet, Rio is in the wind. He’s headed to Europe to live life by his own rules and hook up with his sister for some fun in the European sun. Together Rio and Paris will do what they do best—have fun, find trouble, and break men’s hearts.
Travel with Weber and Pete to Europe, to see how Paris and Rio became the dynamic duo of the Duncan clan.

More books like To Paris with Love: A Family Business Novel may be found by selecting the categories below: