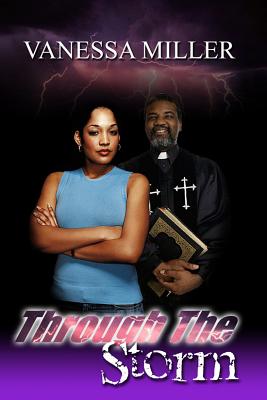 Through the Storm (Urban Books)
by Vanessa Miller

Mass Market Paperback Description: Isaac Walker had once been a heavy handed drug lord, who was proud of the fact that nobody dared to mess with him. But after dedicating his life to the Lord, Isaac began snatching wayward souls out of darkness and into God’s marvelous light. That is, until the day the people Isaac ministered to started coming up missing and a maniac began terrorizing him and his family. Before giving his life over to the Lord, Isaac would have handled this situation with a Glock. But now that Isaac’s only weapons were his Bible and prayer he was counting on God to send His angels to help him fight this battle.

Iona Walker was successful, beautiful and every bit as cold blooded as her father, Isaac Walker had once been. As a lawyer she represents some of the most unsavory criminals in her city. Guilt or innocence doesn’t matter to Iona; cash is what counts. Iona is on her way to making a lot of money, and she doesn’t care that she had to turn her back on God to get it. But when Cynda Williams, Iona’s mother is diagnosed with a life threatening illness and then Iona gets kidnapped, she discovers that all the money in the world won’t help her get a prayer through to God.

More books like Through the Storm (Urban Books) may be found by selecting the categories below: