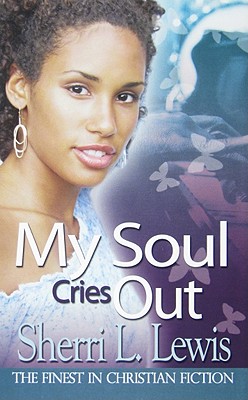 My Soul Cries Out
by Sherri Lewis

Mass Market Paperback Description:
Monica Harris-Day’s perfect world begins a downward spiral the afternoon she comes home to find her husband in bed … with another man. After confronting Kevin, her husband of two years, Monica discovers he’s had a lifelong struggle with homosexuality that began at the age of ten after he was molested by a deacon in the church.

For years, Kevin has sought deliverance, crying out to God to make him straight. He explains his deceit by saying that he thought he had truly been delivered when he married Monica, but was afraid to share his past with her for fear she wouldn’t marry him. Kevin begs Monica’s forgiveness and wants to save their marriage. He is convinced that God has indeed delivered him from the spirit of homosexuality and that the one-time mistake was just his past coming back to haunt him.

Their pastor offers them marital counseling, but Monica suspects he’s really concerned about maintaining his mega-ministry. The church has grown to 10,000 members since Kevin became the minister of music. When the pastor swears them to secrecy and urges Monica to stay in the marriage, she thinks Bishop Walker isn’t willing to risk the potential scandal and church split that would be caused if the truth were leaked to the congregation.

My Soul Cries Out is a compassionate look at the issue of Christians struggling with homosexuality and the redemptive power of God to bring deliverance.

More books like My Soul Cries Out may be found by selecting the categories below: