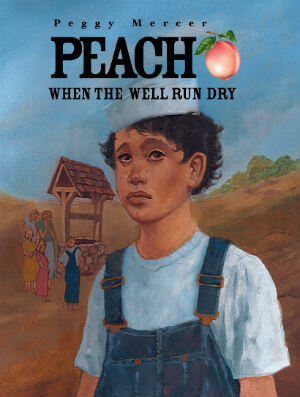 Peach When the Well Run Dry
by Peggy Mercer

Book Description:
It was summer of 1937 in Southern Georgia—a summer that nine-year-old Peach Lucas would never forget. Peach and his family had been able to make it through the Great Depression. Times had been hard. But like millions of other Americans, they made do. But now, the Lucases and the folks of Georgia were facing yet another catastrophe, one much more difficult than the Depression: a drought of end time proportions. Crops dried up and died. So did flowers and plants. Animals went thirsty, too. There wasn’t even enough water for people to drink. And, if things could get worse, they did. A forest fire raged and Peach’s friend High-Pants is accused of starting it. But the summer of 1937 would also be the time that Peach proved himself to a family that had always taken him for granted. He and High-Pants would find an answer to the worst drought of all time. In this coming of age story, Peach stands tall when the well runs dry.

More books like Peach When the Well Run Dry may be found by selecting the categories below:

Tell us what do you think about Peach When the Well Run Dry.