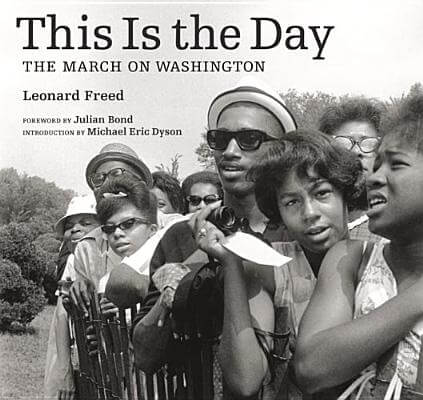 This Is The Day: The March On Washington
by Leonard Freed and Michael Eric Dyson

Read Our Review of This Is The Day: The March On Washington

Book Description:
This Is the Day: The March on Washington is a stirring photo-essay by photographer Leonard Freed documenting the March on Washington for Jobs and Freedom of August 28, 1963, the historic day on which Dr. Martin Luther King Jr. delivered his “I Have a Dream” speech at the base of the Lincoln Memorial. This book commemorates the fiftieth anniversary of the historic march that ultimately led to the passage of the Civil Rights Act of 1964.
Never before published in book form, the seventy-five photographs in this volume were chosen from among the hundreds of images that Freed made in the nation’s capitol—before, during, and after the march. These images not only present us with stunning wide-angle views of hundreds of thousands of marchers overflowing the National Mall but also focus on small groups of people straining to see the speakers and on individual faces, each one filled with hope and yearning, epitomized by the beautiful young woman who throws her entire being into singing "We Shall Overcome.” In addition are eighteen pictures from the twentieth-anniversary march of August 1983, conveying a sense of celebration coupled with peaceful protest.
Accompanying the photographs are a first-hand, backstage account of the preparations leading up to the march by social activist and civil rights leader Julian Bond; an essay on the importance of the march and Dr. King’s involvement by sociology professor and author Michael Eric Dyson; and an informative discussion of Freed’s approach to the photographic project by scholar Paul Farber.

More books like This Is The Day: The March On Washington may be found by selecting the categories below:

Tell us what do you think about This Is The Day: The March On Washington.