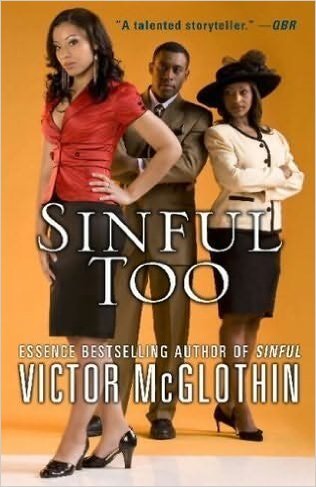 Sinful Too
by Victor McGlothin

YOU CAN’T KEEP A “GOOD” WOMAN DOWN…

She can get any man burning up her satin sheets, paying her bills, and keeping her in Dolce G and Prada. And sexy, sizzling Dior definitely doesn’t “do” church or aspire to anything more than drama-free, cash-rich relationships. But charismatic Pastor Richard Allamay is one temptation she won’t resist-and Dior will do anything to become the new “First Lady” of his wildly successful megachurch. Soon she’s stripping away Richard’s Godly principles, putting him at odds with his congregation, and throwing the lives of his insecure wife and bewildered children into turmoil. It will take a chain of events no one could have imagined-and only God could have planned-for hearts to be healed, transgressions forgiven, and one outrageous, conniving diva allotted the reward she deserves.

McGlothin’s steamy sequel to Sinful reveals what happens when the wicked Dior Wicker determines to marry Dallas pastor Richard Allamay, star of Church TV’s High Praise and “shepherd of Methodist Episcopal Greater Apostolic Church” (M.E.G.A. Church, for short). Lust drives Richard to strange lengths in his attempts to impress Dior (he misuses church money, and lies to his family and cheats on his wife). McGlothin unravels at a relentless pace a sexy and twisted story of marital and spiritual unfaithfulness…
“Eric Jerome Dickey, watch out.” —Publisher’s Weekly Magazine

Backsliders —the long-awaited debut short film from Victor McGlothin is based on the acclaimed novel Sinful Too. Backsliders is modern a day fable of M.E.G.A. Church Pastor Richard Allamay; who falls head over heels for an irresistible bad girl with a checkered past. Dior Wicker is in it for the games and gifts until something happens that tosses her world into a tragic tailspin. It's all over but the crying when the wages of sin are paid in full!

Tell us what do you think about Sinful Too.