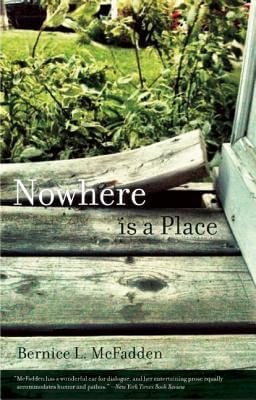 Nowhere Is a Place
by Bernice L. McFadden

Paperback Description:
?Nowhere Is a Place is a powerful portrait of family secrets, damage, and healing, probing deep below the surface of an African American family’s history to mend present day relationships … Ms. McFadden has a beautiful writing style that is simultaneously lyrical and transparent. In parts of the narrative, time seems to stand still as she describes an event in riveting minute to minute detail. Other times she employs a kind of poetic shorthand that condenses long periods of time, years even, into a few sentences.”
—New York Journal of Books

"An engrossing multigenerational saga … With her deep engagement in the material and her brisk but lyrical prose, McFadden creates a poignant epic of resiliency, bringing Sherry to a well-earned awareness of her place atop the shoulders of her ancestors, those who survived so that she might one day, too."
—Publishers Weekly

"Telling her story from two perspectives and on two levels—the mother-daughter relationship and Sherry’s fictional account—McFadden brings added texture to this story of reconciliation."
—Booklist

?A poignant tale of self-discovery in the face of a complicated family history.”
—Brooklyn Daily Eagle

"Bernice L. McFadden’s Nowhere Is a Place is a hauntingly-disturbing and redemptive frame story of many generations of a Yamasee Native-American and African-American family from pre-slavery times until July 1995."
—Bowling Green Daily News

"With a good dose of poignancy about life and finding the wisdom of the world for ourselves, Nowhere is a Place is a fine addition to modern literary fiction collections."
—The Midwest Book Review

"Compelling, beautifully written, and profoundly human, McFadden has conjured a tale of a fractured family who journey across the country and back through history to unearth painful truths that unexpectedly reshape their relationships with each other."
—Lynn Nottage, playwright, author of Intimate Apparel

Nothing can mend a broken heart quite like family. Sherry has struggled all her life to understand who she is, where she comes from, and, most important, why her mother slapped her cheek one summer afternoon. The incident has haunted Sherry, and it causes her to dig into her family’s past. Like many family histories, it is fractured and stubbornly reluctant to reveal its secrets; but Sherry is determined to know the full story. In just a few days’ time, her extended family will gather for a reunion, and Sherry sets off across the country with her mother, Dumpling, to join them. What Sherry and Dumpling find on their trip is far more important than scenic sites here and there—it is the assorted pieces of their family’s past. Pulled together, they reveal a history of amazing survival and abundant joy.

Bernice L. McFadden is the author of eight critically acclaimed novels including the classic Sugar, Gathering of Waters (a New York Times Editors’ Choice), and Glorious, which was featured in O, The Oprah Magazine and was a finalist for the NAACP Image Award. She is a two-time Hurston/Wright Legacy Award finalist, as well as the recipient of two fiction honor awards from the BCALA. Her sophomore novel, The Warmest December, was praised by Nobel Prize-winning author Toni Morrison as "searing and expertly imagined." McFadden lives in Brooklyn, New York.

Books similiar to Nowhere Is a Place may be found in the categories below: