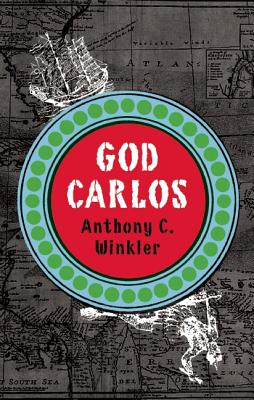 Paperback Description:
A Finalist for the 2014 Townsend Prize for Fiction!

God Carlos has been long-listed for the OMC Bocas Prize for Caribbean Literature in Trinidad.

"A gusty, boisterous, and entertaining slice of historical fiction. In scenes of a mixture of pride, madness, and comedy, Carlos plays out his role as deity among the naked islanders, living a fantasy that most readers will find believable, if horrific. Along with the horror, the book does offer some beautiful moments of discovery, as when, as Winkler narrates, the ship takes the Mona Passage to Jamaica…we hear of an Edenic island, green and aromatic, opened like a wildflower. For all of its scenes of braggadocio and brutality, the book often works on you like that vision."
—Alan Cheuse, NPR, All Things Considered

"Readers are transported to Jamaica, into Winkler’s richly invented 16th century, where his flawless prose paints their slice of time, in turn both brutally graphic and lyrically gorgeous. Comic, tragic, bawdy, sad, and provocative, this is a thoroughly engaging adventure story from a renowned Jamaican author, sure to enchant readers who treasure a fabulous tale exquisitely rendered."
—Library Journal

"A tale of the frequently tragic—and also comic—clash of races and religions brought on by colonization…Anthony Winkler spins an enlightened parable, rich in historical detail and irony."
—Shelf Awareness

"Darkly irreverent…With a sharp tongue, Winkler, a native of Jamaica, deftly imbues this blackly funny satire with an exposé of colonialism’s avarice and futility."
—Publishers Weekly

"With perceptive storytelling and bracing honesty, Mr. Winkler, author of a half-dozen well-reviewed books, has a lovely way of telling a good story and educating concurrently…God Carlos teaches history in a subtle but meaningful way. Too literary to be lumped in with typical historical fiction, and too historical to be lumped in with typical literary fiction, God Carlos defies categorization."
—New York Journal of Books

"God Carlos provides a welcome opportunity to glimpse…the lives of ordinary people, both European and Caribbean, as they experience the calamitous effects of the encounter of two worlds."
—Sargasso: A Journal of Caribbean Literature, Language, & Culture

"The author’s piercing narrative drives home…Here, Winkler’s brilliance as a storyteller is unmistakable…God Carlos is a literary tour de force—atmospheric and incisive. It effuses raw emotion—perplexing, bewildering, and dark…On multiple levels, Winkler proves his salt as a genuine raconteur…the architect of an invaluable literary work."
—The Jamaica Gleaner

"Well-written…Winkler’s descriptions of sea and sky as seen from a sailing ship, and of the physical beauty of Jamaica, are spot-on and breathtaking."
—Historical Novel Review

"In God Carlos and The Family Mansion, Anthony Winkler, the master storyteller, has provided us with texts of both narrative quality and historical substance that should find place in the annals of Caribbean literature."
—SX Salon

God Carlos transports us to a voyage aboard the Santa Inez, a Spanish sailing vessel bound for the newly discovered West Indies with a fortune-seeking band of ragtag sailors. She is an unusual explorer for her day, carrying no provisions for the settlers, no seed for planting crops, manned by vain, arrogant men looking for gold in Jamaica.

Expecting to make landfall in paradise after over a month at sea, the crew of the Santa Inez instead find themselves in the middle of a timid, innocent people—the Arawaks—who walk around stark naked without embarrassment and who venerate their own customs and worship their own Gods and creeds. The European newcomers do not find gold, only the merciless climate that nourishes diseases that slaughter them. That the Arawaks believed that the arrivals were from heaven makes even more complicated this impossible entanglement of culture, custom, and beliefs, ultimately leading to mutual doom.

Books similiar to God Carlos may be found in the categories below: