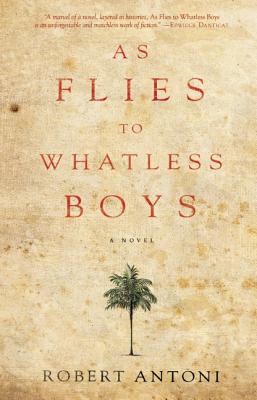 As Flies to Whatless Boys
by Robert Antoni

Book Description:
As Flies to Whatless Boys has been longlisted for the 2015 International IMPAC Dublin Literary Award!

One of Edwidge Danticat’s Best Books of 2013, the New Yorker

"William’s account of young love attests to Antoni’s fluency in the poetry of nostalgia. In words as vibrant as the personalities he creates, Antoni deftly captures unconquered territories and the risks we’re willing to take exploring them."
Publishers Weekly

"Robert Antoni gracefully combines layers of idealism, love, and a plague of the Black Vomit in this historical novel."
World Literature Today

"It brings the travails and small delights of Willy Tucker to the centre stage of our imaginings, asking only that we accompany him on this unforgettable voyage."
Caribbean Beat

"This tragic historical novel, accented with West Indian cadence and captivating humour, provides an unforgettable glimpse into 19th-century T&T. The book’s narrator, Willy, falls headover-heels for the enthralling and wise Marguerite Whitechurch. Coming from the gentry, Marguerite is a world away from Willy’s labouring class."
The Trinidad Guardian, one of the Best Caribbean Books of the Year

"I have been hooked on Robert Antoni since his first novel, Divina Trace. His new one, As Flies to Whatless Boys, is a marvel of narrative and documents, which collide to create a book that is at times breathtaking and tragic and at other times laugh-out-loud hilarious."
Edwidge Danticat, who selected As Flies to Whatless Boys as a Best Book of 2013 for the New Yorker?s Page-Turner Blog

"As Flies to Whatless Boys is a kind of complex word game, a historical narrative in a lilting Caribbean accent, wrapped around with an oddball love story in a wild form of English that seems to create itself as it goes along. In between, snippets of contemporary records provide foils for both these linguistic inventions."
Historical Novel Society

In 1845 London, an engineer, philosopher, philanthropist, and bold-faced charlatan, John Adolphus Etzler, has invented machines that he thinks will transform the division of labor and free all men. He forms a collective called the Tropical Emigration Society (TES), and recruits a variety of London citizens to take his machines and his misguided ideas to form a proto-socialist, utopian community in the British colony of Trinidad.

Among his recruits is a young boy (and the book’s narrator) named Willy, who falls head-over-heels for the enthralling and wise Marguerite Whitechurch. Coming from the gentry, Marguerite is a world away from Willy’s laboring class. As the voyage continues, and their love for one another strengthens, Willy and Marguerite prove themselves to be true socialists, their actions and adventures standing in stark contrast to Etzler’s disconnected theories.

More books like As Flies to Whatless Boys may be found by selecting the categories below:

Tell us what do you think about As Flies to Whatless Boys.