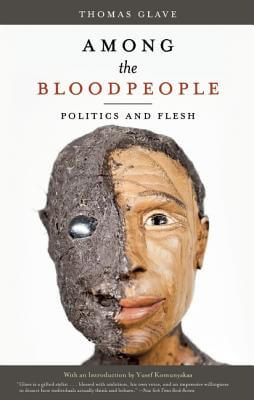 Among the Bloodpeople: Politics and Flesh
by Thomas Glave

Named a finalist for the 2014 Lambda Literary Award in LGBT Nonfiction!

"This collection is wide-ranging, moving from the Caribbean (Jamaica in particular) to Cambridge, England, and from poetry to sex to discrimination."
—Library Journal (BEA Editors’ Picks feature)

"A profound compassion for racial and sexual minorities, the oppressed, and the colonized, informs [Glave’s] searing, beautifully evocative collection of essays…He captures the languor and seductiveness of Jamaica…A graceful and original stylist, Glave highlights the marginalized—calling on the descendants of people who toiled for the Empire as slaves and colonial subjects to never forget their past, and, in effect, to those who profit from that past to acknowledge their complicity. Ultimately, his work is critical, yet filled with generosity and compassion."
—Publishers Weekly (starred review)

"Thomas Glave surely is one of the bravest of contemporary authors…He is a fearless truth-teller whose essays in Among the Bloodpeople are fully, unhesitatingly engaged with his and our world."
—New York Journal of Books

"This is a collection that will leave you with chills; you will return to it not only for its sheer beauty, but also for its raw honesty, pain, and passion."
—Lambda Literary Report

"Glave remarks on the state of an island as he sees it, and of a people whose legacies bear out in astonishing ways, employing prose that soothes while its subject matter sears genteel sensibilities."
—Caribbean Beat

"Glave crosses boundaries of genre and community, speaking with extraordinary candor and vulnerability variously as the American son of immigrants, as a Jamaican, as a professor, as a queer boy from the Bronx…What unifies these identities and these essays is the ferocity of Glave’s voice, his sentences that can feel like living, untamed things."
—Towleroad: A Site with Homosexual Tendencies

"I didn’t know [homosexuals in Jamaica] were disemboweled with machetes. And I didn’t consider one could be poetic about fear and anger and isolation. But the touchingly phrased sentences don’t soften the impact of reading about murder and political corruption. Instead, it eats at you because it makes you attentive to every word, feel the pauses as Glave takes a breath and speaks with the pulse of his heartbeat."
—Reeling and Writhing and Fainting in Coils

"With Among the Bloodpeople, [Glave] has given us a book as beautiful as it is necessary."
—Next Magazine

"After stunning readers with his story collections Whose Song? and The Torturer’s Wife, the O. Henry- and multiple Lammy-winner now returns to nonfiction in Among the Bloodpeople: Politics and Flesh."
—Band of Thebes

"Glave’s texts examine themselves, change course, and raise questions about their own assertions. Glave’s hatred of oppression is balanced by his love of writing."
—Ithaca.com

Thomas Glave has been admired for his unique style and exploration of taboo, politically volatile topics. The award-winning author’s new collection, Among the Bloodpeople, contains all the power and daring of his earlier writing but ventures even further into the political, the personal, and the secret.

Each essay in the volume reveals a passionate commitment to social justice and human truth. Whether confronting Jamaica’s prime minister on antigay bigotry, contemplating the risks and seductions of "outlawed" sex, exploring a world of octopuses and men performing somersaults in the Caribbean Sea, or challenging repressive tactics employed at the University of Cambridge, Glave expresses the observations of a global citizen with the voice of a poet.

Books similiar to Among the Bloodpeople: Politics and Flesh may be found in the categories below: