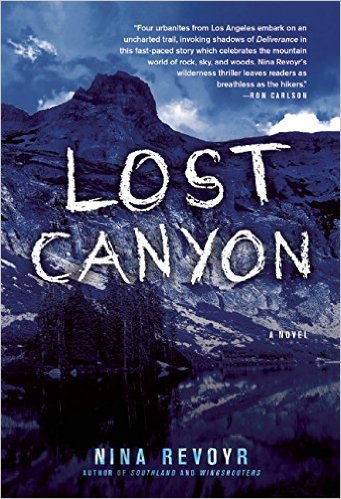 Nina Revoyr’s fifth novel, Lost Canyon. Booklist called it “a gripping tale of unintended adventure and profound transformation,” and the San Francisco Chronicle described it as “(A) heart-hammering literary thriller…almost as much of a rush as scaling the sheer, icy rock of the Sierra Nevada.” The Los Angeles Times described Nina as “one of (L.A.’s) finest scribes,” and the Los Angeles Review of Books has called her “one of the city’s great storytellers.”

Four people on a backpacking trip in the Sierra Nevada find more adventure than they ever imagined. Each of them is drawn to the mountains for reasons as diverse as their own lives. Gwen Foster, a counselor for at-risk youth, is struggling with burnout from the demands of her job and with the loss of one of her teens. Real estate agent Oscar Barajas is adjusting to the fall of the housing market and being a single parent. Todd Harris, an attorney, is stuck in a lucrative but unfulfilling career—and in a failing marriage. They are all brought together by their trainer, Tracy Cole, a former athlete with a taste for risky pursuits.

When the hikers start up a pristine mountain trail that hasn’t been traveled in years, all they have to guide them is a hand-drawn map of a remote, mysterious place called Lost Canyon. At first, the route past high alpine lakes and under towering, snowcapped peaks offers all the freedom and exhilaration they’d hoped for. But when they stumble onto someone who doesn’t want to be found, the group finds itself faced with a series of dangerous conflicts, moral dilemmas, confrontations with nature, and an all-out struggle for survival.

Moving effortlessly between city and wilderness, Lost Canyon explores the ways that race, class, and culture shape experience and perception. It examines the choices good people must face in desperate situations. Set in the grand, wild landscape of the California mountains, Lost Canyon is a story of brewing social tensions and breathtaking adventure that will keep readers on the edge of their seats.

Books similiar to Lost Canyon may be found in the categories below: