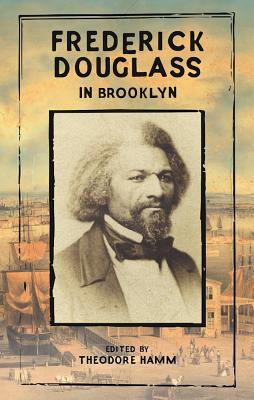 Book Description:
"A fascinating collection of Frederick Douglass’s controversial speeches in Brooklyn, N.Y., this volume compiles original source material that illustrates the relationship between the abolitionist and the then city of Brooklyn."
—Publishers Weekly, Fall 2016 Announcements

"It is my hope that this book will introduce Frederick Douglass to a generation that could benefit from the example of his clarity of purpose and moral vision, as well as his relationship to the Borough of Brooklyn."
—Brooklyn Borough President Eric L. Adams

"Theodore Hamm simultaneously engages scholars of history, politics, and New York City in his well-edited and carefully crafted selection of Frederick Douglass’s speeches in Brooklyn. Many of the questions raised by Douglass are still relevant today. What will be the fate of black people living in the US? Do places like Brooklyn serve as incubators of injustice—or promise a better future—for people of color? This is an insightful and invaluable book for anyone interested in race, ethnicity, cities, injustice, and the quest for equality."
—Christina Greer, associate professor of political science at Fordham University and columnist, The Amsterdam News

This volume compiles original source material that illustrates the relationship between the abolitionist and Brooklyn. Most prominent are the speeches Douglass gave at the Brooklyn Academy of Music, Plymouth Church, and other leading Brooklyn institutions. Whether discussing the politics of the Civil War or recounting his relationships with his friends Abraham Lincoln and John Brown, Douglass’s towering voice sounds anything but dated.

The volume also provides a healthy sampling of clippings from newspapers, including the New York Tribune, Brooklyn Daily Eagle, and the Brooklyn Daily Times, which published Walt Whitman’s account of Douglass’s 1859 speech in Williamsburg. An introductory essay examines the intricate ties between Douglass and Brooklyn abolitionists, while brief chapter introductions and annotations fill in the historical blanks.

More books like Frederick Douglass in Brooklyn may be found by selecting the categories below: