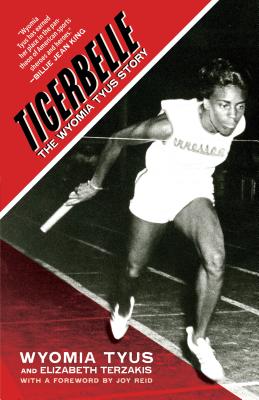 Paperback Description:
"Wyomia Tyus may not be as well known as Wilma Rudolph or Billie Jean King, but her athletic accomplishments and life story are equally captivating, as related in this remarkable and inspiring memoir…This deeply moving book by one of our greatest athletes makes indelible statements about integrity, growing up black in the South, social activism, gender equality, and inclusion."
—Booklist, STARRED review"A half-century after her triumph, a record-setting Olympic champion recieves her due…[Tyus] has lived a life of accomplishment and meaning. An inspirational story that deserves to be told."
—Kirkus Reviews"[Dave] Zirin’s Edge of Sports imprint at Akashic is publishing Tigerbelle (Sept.), a memoir from two-time Olympic gold medalist sprinter Wyomia Tyus. The daughter of a tenant farmer in rural Georgia, she won top honors at the 1964 and 1968 Olympics. In the book, coauthored by Elizabeth Terzakis, she recalls her turbulent path to the top and her struggle to find recognition afterward."
—Publishers Weekly, Sports Preview"Tigerbelle offers a fresh perspective on the history of women’s sports in the United States. From her one-of-a-kind accomplishments on the track to her contributions to equal pay and publicity for women through the Women’s Sports Foundation, Wyomia Tyus has earned her place in the pantheon of American sports sheroes and heroes."
—Billie Jean King"Wyomia Tyus’s story is truly an American story. It is one of profound loss and quiet courage, illustrating the contradictions of race and gender in this country and an unrelenting commitment to growth in spite of life’s obstacles. From a dairy farm in Griffin, Georgia, to the annals of American sports history, Tyus inspires and teaches us all about ’getting out of the blocks’ with humility, grace, and power. Her story gives true meaning to the phrase Black Girl Magic!"
—Eddie S. Glaude Jr., chair of the Center for African American Studies at Princeton University"Wyomia Tyus has been an eyewitness to the cutting edge of history. Along with her Tigerbelle teammates, she pioneered sporting opportunities for women. As a great Olympic champion, she became the first person to successfully defend an Olympic hundred-meter-dash title. As a black woman, she saw how America treated her heroes, and how quickly they were cast aside. Wyomia’s perspective is observant, thoughtful, and full of hope?a voice of her generation that needs to be heard."
—John Naber, five-time Olympic medalist swimmerIn 1968, Wyomia Tyus became the first person ever to win gold medals in the 100-meter sprint in two consecutive Olympic Games, a feat that would not be repeated for twenty years or exceeded for almost fifty. Tigerbelle chronicles Tyus’s journey from her childhood as the daughter of a tenant dairy farmer through her Olympic triumphs to her post-competition struggles to make a way for herself and other female athletes.The Hidden Figures of sport, Tigerbelle helps to fill the gap currently occupying Black women’s place in American history, providing insight not only on what it takes to be a champion but also on what it means to stake out an identity in an often hostile world. Tyus’s exciting and uplifting story offers inspiration to readers from all walks of life.With a foreword by MSNBC host Joy Reid, and an afterword by sportswriter Dave Zirin.

Books similiar to Tigerbelle: The Wyomia Tyus Story may be found in the categories below: