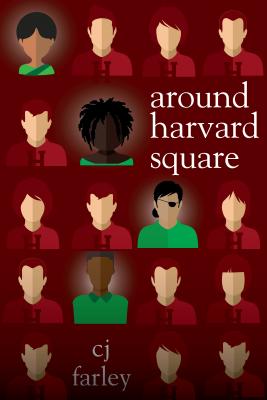 Paperback Description:
"Wry, sly, and ferociously funny, Around Harvard Square is not just the satire Ivy League college life deserves, but the one it’s been waiting for."
—Marlon James, Man Booker Prize winning author of A Brief History of Seven Killings"Brimming with humor and heart, Around Harvard Square is a delight."
—Andy Borowitz, creator of the New Yorker’s "The Borowitz Report""The first year of college can feel as dramatic as the first moon landing and somehow C.J. Farley also turns it into a painfully funny adventure. Around Harvard Square is a coming-of-age tale that blends J.D. Salinger’s rueful tones with Paul Beatty’s biting humor and becomes something entirely its own. I had so much fun running around with these kids, it felt like seeing old friends: laughing and crying and laughing some more."
—Victor LaValle, author of The Changeling"A hysterical romp through one memorable freshman year. At Farley’s Hahvahd, it’s survival of the funniest, comedy means never having to say you’re sorry, and growing up is hard to do. A provocative pleasure."
—Gish Jen, author of Typical American"In this sharp and imaginative satirical fantasy, C.J. Farley explores the complex realms of race and privilege at college with humor, insight, and edge."
—Walter Isaacson, author of Leonardo da Vinci"Finally a young brother with a powerful voice, not afraid to say it loud and proud. I welcome him!"
—Terry McMillan"Farley plays the nineties American Zeitgeist like a violin. But don’t let the laughs deceive you. He hits some literary home runs about a whole bunch of issues: politics, race, and sex."
—Ishmael ReedIt’s the nineties, and Tosh Livingston, straight-A student and superstar athlete, is living the dream—he’s made it out of upstate New York and into the incoming freshman class at Harvard University. But after an accident blows up his basketball-playing hopes, he discovers a new purpose in life—to win the frenzied competition for a spot on the staff of the Harvard Harpoon, the school’s legendary humor magazine.Along with Lao, his pot-smoking roommate from China, their friend Meera, a passive-aggressive science major from India, and Zippa, a Jamaican student-activist with a flair for cartooning, Tosh finds that becoming a member of the Harpoon is weirder and more dangerous than anyone could have imagined. Success requires pushing themselves to their limits and unearthing long-buried secrets that will rock their school and change all of their lives forever.With its whip-smart humor and fast-paced narrative, Around Harvard Square will appeal to readers of all ages interested in exploring the complicated roles that race and class play in higher education.

Books similiar to Around Harvard Square may be found in the categories below: