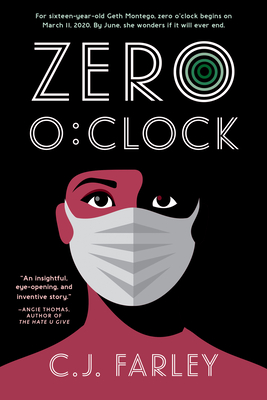 For sixteen-year-old Geth Montego, zero o’clock begins on March 11, 2020. By June, she wonders if it will ever end.

An insightful, eye-opening, and inventive story. C.J. Farley has penned a novel that sheds an important light on real issues facing young people today.
—Angie Thomas, author of The Hate U Give

Zero O’Clock is a beautiful and timely YA novel that is both heartbreaking and whip smart, a glimpse into the world of virtual friendship, classrooms, and pop stardom.
—Jeanne McWilliams Blasberg, author of The Nine

Thoughtful, provocative, and pounding with the fast-paced beat of a sharp-witted adolescent mind, Zero O’Clock is the story of a Jamaican-American teen girl at the early epicenter of the COVID-19 pandemic in New Rochelle, New York. C.J. Farley has created an irresistible heroine in Geth Montego. Simmering with justifiable anger at everything from the cancellation of her senior prom to racial injustices and police brutality, Geth manages to overcome grief, anxiety, and confusion to discover a new sense of herself and her ability to create change.
—Karen Dukess, author of The Last Book Party

Zero O’Clock seems to have a direct line into the mindset of a modern teenager. I enjoyed it immensely!
—Alex Wheatle, author of Cane Warriors

In early March 2020 in New Rochelle, New York, teenager Geth Montego is fumbling with the present and uncertain about her future. She only has three friends: her best friend Tovah, who’s been acting weird ever since they started applying to college; Diego, who she wants to ask to prom; and the K-pop band BTS, because the group always seems to be there for her when she needs them (at least in her head).

She could use some help now. Geth’s small city becomes one of the first COVID-19 containment zones in the US. As her community is upended by the virus and stirred up by the growing Black Lives Matter protests, Geth faces a choice and a question: Is she willing to risk everything to fight for her beliefs? And if so, what exactly does she believe in? C.J. Farley captures a moment in spring 2020 no teenager will ever forget. It sucks watching the world fall apart. But sometimes you have to start from zero.

More books like Zero O’Clock may be found by selecting the categories below: