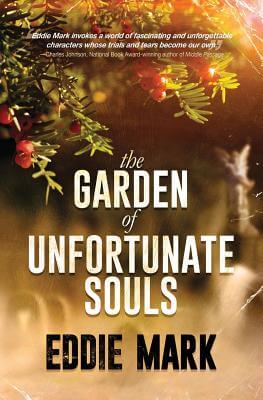 The Garden of Unfortunate Souls
by Eddie Mark

“With compassion and superb craftsmanship, Eddie Mark invokes a world of fascinating and unforgettable characters whose trials and tears become our own. The Garden of Unfortunate Souls is a powerful debut by a writer concerned, first and foremost, with the human heart.” -Charles Johnson, National Book Award-winning author of Middle Passage

In this tragic tale of two culturally different African American families, Eddie Mark “thoughtfully and powerfully examines the intersections of power, social class, and gender” (Readers+Writers Journal). In 1980s Buffalo, New York, the recession has transformed the city’s proudest African American neighborhood into a ghetto. Loretta Ford, an eccentric single mother and religious fanatic, survives for years by masquerading as the owner of a dead woman’s house. Her reclusive life is interrupted when an unlikely incident brings the mayor of Buffalo to her home in the middle of the night. Their secret meeting sets off a chain of events that will leave two families altered forever.

Written by an author whose “prose, subject matter, and characters are reminiscent of John Steinbeck” (Readers+Writers Journal), The Garden of Unfortunate Souls challenges us to rethink old assumptions about the root causes of violence in urban communities. Recently nominated for Breakout Author of the Year by the African American Literary Awards Show, Eddie Mark is becoming an important new voice in African American fiction.

More books like The Garden of Unfortunate Souls may be found by selecting the categories below: