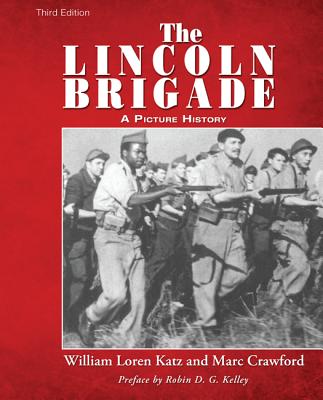 The Lincoln Brigade: A Picture History
by William L. Katz

Book Description:
THE LINCOLN BRIGADE The day after Christmas in 1936, a group of ninety-six Americans sailed from New York to help Spain defend its democratic government against fascism. Ultimately, twenty-eight hundred United States volunteers reached Spain to become the Abraham Lincoln Brigade. Few Lincolns had any military training. More than half were seriously wounded or died in battle. Most Lincolns were activists and idealists who had worked with and demonstrated for the homeless and unemployed during the Great Depression. They were poets and blue-collar workers, professors and students, seamen and journalists, lawyers and painters, Christians and Jews, blacks and whites. The Brigade was the first fully integrated United States army, and Oliver Law, an African American from Texas, was an early Lincoln commander. William Loren Katz and the late Marc Crawford twice traveled with the Brigade to Spain in the 1980s, interviewed surviving Lincolns on old battlefields, and obtained never-before-published documents and photographs for this book.

More books like The Lincoln Brigade: A Picture History may be found by selecting the categories below:

Tell us what do you think about The Lincoln Brigade: A Picture History.