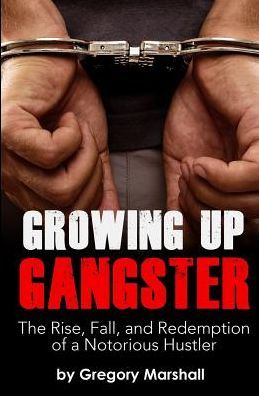 Growing Up Gangster: The Rise, Fall and Redemption of a Notorious Hustler
by Gregory Marshall

As a child growing up in South Central Los Angeles, Gregory Marshall was enamored with the fast life. Money, women and cars were the things to have and Greg was determined to get them-by any means necessary. It wasn’t long before the innocent youngster had turned into a cold-hearted gangster known around town simply as G Man. His ruthless life of crime made him a legend in South Central LA-and the go-to man for everyone from Tupac Shakur to the notorious Monster Kody. But a drug deal gone bad eventually left him shot and near death…forcing him into the ultimate struggle for survival.

Faced with intense rehabilitation and paralysis that had crippled the entire right side of his body, Greg had two choices, give up or get up. He chose the latter. And with the use of only one finger, he wrote his story through gritty, breathtaking, and sometimes brutal details…including his anger at injustices, the pain of abandonment and one unlikely act of kindness that started him on the path of healing and forgiveness.

More books like Growing Up Gangster: The Rise, Fall and Redemption of a Notorious Hustler may be found by selecting the categories below: