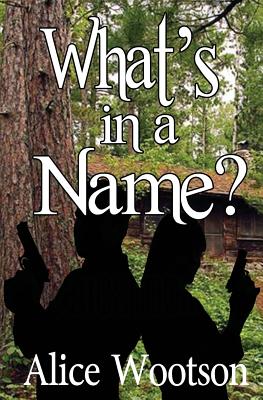 What’s in a Name
by Alice Wootson

Paperback Description:
When graduate student and genius engineer, Takeem El, is picked up by government agents because his name matches that of a terrorist on their watch list, members of an extremist group kill the agents and take Takeem, hoping to use him for their cause. Agents Kelli Malone and Jake Landis are assigned to rescue him and capture the extremists. However, Jake and Kelli have a history, and neither one is sure the other can be trusted. They were an item six years ago, before Kelli suddenly broke it off with no explanation. Now Jake is determined to win her back. But Kelli had her reasons for ending their relationship, and she doesn’t think Jake has changed much since then. As their passion ignites, so does the mission, putting their lives, and Takeem’s, on the line. Now these two stubborn, independent agents must set aside their differences and work together to rescue an innocent man, before the mistakes of their past cost them not only their love, but their lives.

More books like What’s in a Name may be found by selecting the categories below: