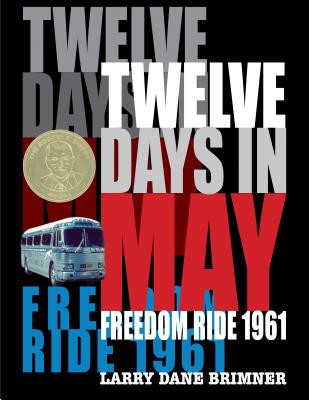 Twelve Days in May: Freedom Ride 1961
by Larry Dane Brimner

On May 4, 1961, a group of thirteen black and white civil rights activists launched the Freedom Ride, aiming to challenge the practice of segregation on buses and at bus terminal facilities in the South.

The Ride would last twelve days. Despite the fact that segregation on buses crossing state lines was ruled unconstitutional by the Supreme Court in 1946, and segregation in interstate transportation facilities was ruled unconstitutional in 1960, these rulings were routinely ignored in the South. The thirteen Freedom Riders intended to test the laws and draw attention to the lack of enforcement with their peaceful protest. As the Riders traveled deeper into the South, they encountered increasing violence and opposition. Noted civil rights author Larry Dane Brimner relies on archival documents and rarely seen images to tell the riveting story of the little-known first days of the Freedom Ride. With author’s note, source notes, bibliography, and index.

More books like Twelve Days in May: Freedom Ride 1961 may be found by selecting the categories below: