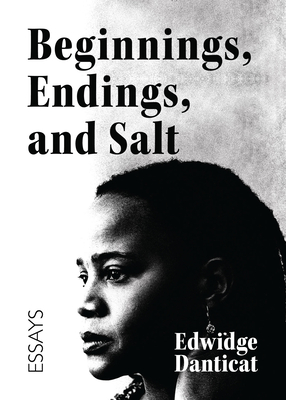 Today, Edwidge Danticat is an award-winning writer. But how did she get here? Follow her literary journey from her childhood in Haiti to her relationships—both on the page and in the flesh—with other writing greats in Beginnings, Endings, and Salt.

Dive into this prolific fiction writer’s stories of her childhood in Haiti without her parents, who had to work an ocean away to make a better life for their family, and explore some of her lyrical creations, such as "Un/titled" and "Legend." Edwidge Danticat’s essays are a must-read. As you learn about the bestselling author of Breath, Eyes, Memory, Krik? Krak!, and many more incredible titles, you will find that there is no one-size-fits-all path to authorship.

Delve into the mentorship relationships Danticat had with some other incredible authors. Danticat’s love of creative works began with, among others, greats like Lorraine Hansberry, James Baldwin, and Gabriel Garc a M rquez. Then, never imagining she would meet them in person, Danticat grew to love Toni Morrison and Paule Marshall through their writing. It was not until years later that she was mentored by these two women, and in a joint eulogy shows just how much they meant to her. Reacting to a potential mass shooting, Danticat also ponders what it means to live with the fear of death and how to continue to create, while "trying not to die."

Discover how Edwidge Danticat became the award-winning author she is today. In Beginnings, Endings, and Salt, explore:

Readers of literary essays, author memoirs, and creative writing books like On Writing, What I Talk About When I Talk About Running, or Letter to My Daughter will love Edwidge Danticat’s Beginnings, Endings, and Salt.

Books similiar to Beginnings, Endings, and Salt: Essays may be found in the categories below: