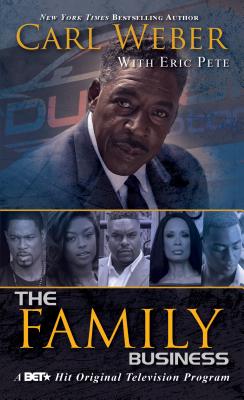 The Family Business
by Carl Weber and Eric Pete

Mass Market Paperback Description:
Meet the Duncans, a prominent family from Jamaica, Queens. They may be known for their big house, fancy cars, and lavish lifestyle, but that doesn’t make them immune from some over-the-top drama. LC Duncan has run his successful car dealership in Jamaica, Queens for more than thirty years, but when the recession hits and the competition gets a little rough, some say it’s time for him to retire. Palm trees and golf sound like fun, but LC still has a few tricks up his sleeve. Which one of his kids can he trust to run the family business? Paris could give any supermodel a run for her money. When she walks in the room, all heads turn, but it’s her anger issues and knack for getting into trouble that most people remember. She’s much more dangerous than anyone gives her credit for—except, perhaps, her father. Orlando is the most obvious choice to lead the Duncans into the future. He has proven himself to be quite the businessman over the years; but sometimes, the most obvious choice isn’t always the best choice. Harris Grant is married to LC’s oldest daughter. In Harris’s opinion, he’s the most qualified to run the family business. Now he just needs to convince LC … and make sure no one discovers the secret he’s been keeping. Harris isn’t the only one with skeletons in the closet. The Duncan family has been keeping a secret of their own—a deep, dark secret that, if revealed, will shock the entire community.

More books like The Family Business may be found by selecting the categories below: