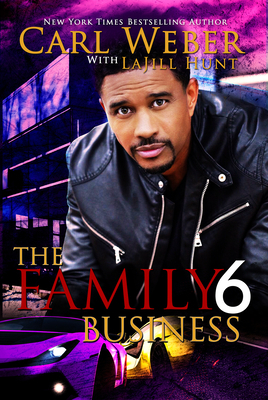 The Family Business 6
by Carl Weber and La Jill Hunt

Hardcover Description:
New York Times bestselling author Carl Weber and Essence(R) bestseller La Jill Hunt return with a story of love, money, power, and respect in the next edition of the popular Family Business series.
Five years ago, Orlando Duncan created the perfect drug in HEAT. It made the Duncans more than two hundred and fifty million dollars and was on its way to making them billionaires. However, they abruptly stopped manufacturing the drug when it was proven to cause cancer in rats. Yes, even as drug distributors, they still had a moral compass, placing lives over profit despite the overwhelming demand. When Orlando is awakened by an alarm in his old lab, he discovers that not only have all his computers, equipment, and notes been stolen, but the robbers have also taken over a million tabs of HEAT that he’d left behind for future experiments—tabs that he had sworn to his family he would destroy. Dr. Brandi Richardson is one of the most brilliant research chemists in the world, but her propensity for cutting corners led to her firing from both Dow Chemicals and Dupont. She’s now working at CVS as a clerk, but things are about to change for her in a big way. Billionaire Alexander Cora is known as the Moor by business associates and enemies. His company, Cora International, is a publicly-traded EU defense contractor. It is also a front for one of the largest weapons, drugs, and illegal contraband smuggling rings in the world. For some reason, he has set his sights on the Duncan family. That can’t be good, because Alexander plays for keeps, and he has not been known to lose. Niles Monroe, the handsome hitman and Paris Duncan’s one true love, is back from the dead, and it’s only a matter of time before he comes looking for her. These rich and powerful people are on a collision course. When the dust settles, who will still be alive, and who will be on top?

Books similiar to The Family Business 6 may be found in the categories below: