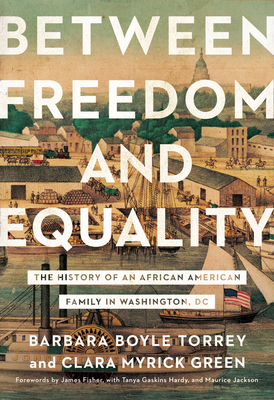 Between Freedom and Equality: The History of an African American Family in Washington, DC
by Barbara Boyle Torrey and Clara Myrick Green

An original history of six generations of an African American family living in Washington, DC

Between Freedom and Equality begins with the life of Capt. George Pointer, an enslaved African who purchased his freedom in 1793 while working for George Washington’s Potomac Company. It follows the lives of six generations of his descendants as they lived and worked on the banks of the Potomac, in the port of Georgetown, and in a rural corner of the nation’s capital. By tracing the story of one family and their experiences, Between Freedom and Equality offers a moving and inspiring look at the challenges that free African Americans have faced in Washington, DC, since the district’s founding.

The story begins with an 1829 letter from Pointer that is preserved today in the National Archives. Inspired by Pointer’s letter, authors Barbara Boyle Torrey and Clara Myrick Green began researching this remarkable man who was a boat captain and supervisory engineer for the Potomac canal system. What they discovered about the lives of Pointer and his family provides unique insight across two centuries of Washington, DC, history.

The Pointer family faced many challenges—the fragility of freedom in a slaveholding society, racism, wars, floods, and epidemics—but their refuge was the small farm they purchased in what is now Chevy Chase. However, in the early twentieth century, the DC government used eminent domain to force the sale of their farm and replaced it with an all-white school. Between Freedom and Equality grants Pointer and his descendants their long-overdue place in American history.

This book includes a foreword by historian Maurice Jackson exploring the significance of the Pointer family’s unique history in the capital. In another very personal foreword, James Fisher, an eighth-generation descendant of George Pointer, shares his complex emotions when he learned about his ancestors. Also featured in this important history is a facsimile and transcription of George Pointer’s original letter and a family tree.

Royalties from the sale of the book will go to Historic Chevy Chase DC (HCCDC), which has established a fund for promoting the legacy of George Pointer and his descendants.

Books similiar to Between Freedom and Equality: The History of an African American Family in Washington, DC may be found in the categories below: