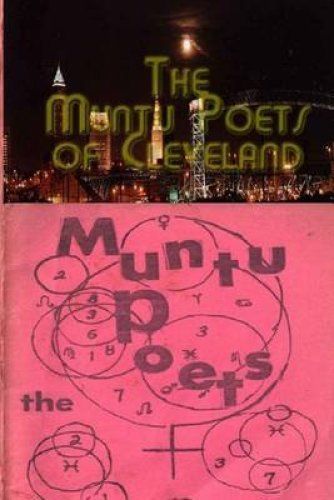 The Muntu Poets Of Cleveland
by Russell Atkins

This is the very first anthology by the Muntu Poets - a forgotten voice in the mid to late 60’s in the city of Cleveland - was an entity that was a product of its time. There were no membership cards or applications to fill out or any barrier to be a Muntu Poet. It was a fluid entity that existed for people in the area waiting to be exposed to poetry and to the technicalities of writing poetry. For the most part, the majority of the poets were young, movement conscious, energetic and upset with the status quo. There wasn’t anyone who was laboring under any illusions about our plight. Everyone expressed themselves in different ways I’d say. The poets read all over the place, including in other states, for the better part of 67/68 under the banner of Muntu.

The workshop took place once a week at a place on Superior Avenue and Ansel Road on the second floor of the building. There were folks present who were poets before the workshop and people who were there just to check out what was going on. There was an eclectic group of styles present. The voices of dissent were the loudest and it was this group that raised their voices everywhere they went. In their view, there was nothing pretty or funny about the circumstances Black people were in. They were the only group of poets in the city doing that. They felt that everyone else was putting honey and perfume on shit. The poets who had a similar outlook were the ones who usually read together at various venues around the country.

The last time that the group officially met was on July 23rd of 1968 at 10518 Elk Avenue. That day, (the beginning of the Glenville Riots) was what the Muntu Poets predicted was coming. Most of the poets continued to write and now they have gathered to write another anthology 47 years after the first was written. This anthology is a tribute to Russell Atkins and Norman Jordan who were the leaders of the powerful group of writers.

More books like The Muntu Poets Of Cleveland may be found by selecting the categories below: