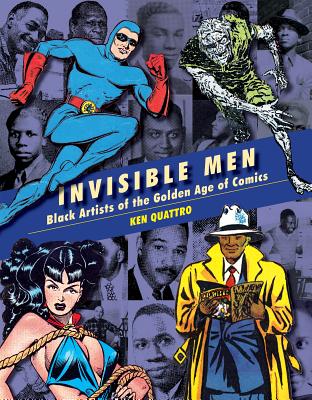 Invisible Men: Black Artists of the Golden Age of Comics
by Ken Quattro

Book Description:
Hear the riveting stories of Black artists who drew, mostly covertly behind the scenes, superhero, horror, and romance comics in the early years of the industry. The life stories of each man’s personal struggles and triumphs are represented as they broke through into a world formerly occupied only by whites. Using primary source material from World War II-era Black newspapers and magazines, this compelling book profiles pioneers like E.C. Stoner, a descendant of one of George Washington’s slaves, who became a renowned fine artist of the Harlem Renaissance and the first Black to draw comic books. Perhaps more fascinating is Owen Middleton who was sentenced to life in Sing Sing. Middleton’s imprisonment became a cause c l bre championed by Will Durant, which led to Middleton’s release and subsequent comics career. Then there is Matt Baker, the most revered of the Black artists, whose exquisite art spotlights stunning women and men, and who drew the first groundbreaking Black comic book hero, Vooda! The book is gorgeously illustrated with rare examples of each artist’s work, including full stories from mainstream comic books to rare titles like All-Negro Comics and Negro Heroes, plus unpublished artist’s photos. Invisible Men features Ken Quattro’s impeccable research and lean writing detailing the social and cultural environments that formed these extraordinary, yet invisible, men!

More books like Invisible Men: Black Artists of the Golden Age of Comics may be found by selecting the categories below: