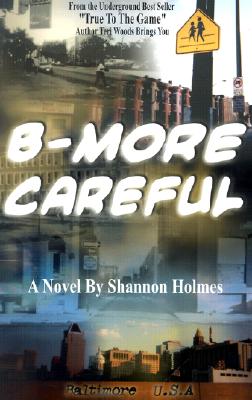 Previously published by Teri Woods Publishing, B-More Careful (pictured right) is one of the books that helped kickstart the Urban Fiction Genre’s explosion 20 years ago.

Holmes penned this urban classic, his first novel, B-More Careful, while serving a five-year prison sentence. Upon his release, Holmes found immediate success: the novel would go on to sell 100,000 copies its first year of publication, and more than 350,000 to date!

B-More Careful takes sex, lies, and betrayal to the next level in an action-packed, fast-paced, suspense-filled novel. Growing up on the cold, mean, inner-city streets of Baltimore is Netta, leader of an all-girl clique called the Pussy Pound. With no father and a dope fiend for a mother, Netta learns at an early age how to use her beauty and her body to get the things she wants: money, cars, and jewelry.

Chasing the almighty dollar, she meets Black, a local drug dealer with a deep-seated hatred for New Yorkers who falls head over heels in love with her. With a broken heart, Black discovers that Netta is only after his money and seeks the ultimate revenge against her life.

Books similiar to B-More Careful may be found in the categories below: