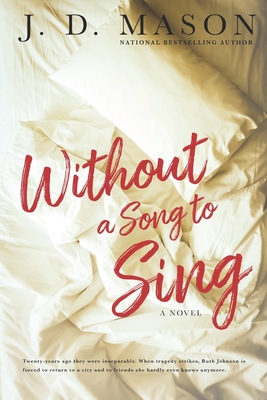 Without A Song To Sing
by J.D. Mason

Paperback Description:
Twenty-years is a long time to wait before going home again. Tragedy scoops up Ruth Johnson and drops her back down in her hometown, decades after she survived a vicious attack at the hands of her ex-husband, Eric Ashton. Ruth spent those years healing, rebuilding, becoming brand new and sharing her story of survival and victory with the world in her memoir that made her an international bestselling author. For years, she’s been on top of the food chain in the literary world, but the murder of her assistant, and the attempted murder of Ruth, has caused her world to come crashing down around her, forcing her back to the one place she thought she’d never live again, Jacksonville, Florida.There was a time when they were closer than sisters, May, Bernie, Clara rallied around Ruth in at the lowest point in her life and helped uplift her into the woman she was always meant to be. But somewhere on Ruth’s road to success, she’d left her friends behind. Success is one hell of a drug and near death experiences have a way of humbling a person. Among her friends again, Ruth is forced to face the ramifications of turning her back on them and another kind of rebuilding has to take place if she hopes to salvage these precious relationships.Adrian Carter is still fine, and, due to unexpected recent events, still single. A long time ago, he broke her heart. Ruth believed that she was finally over him. Seeing him again, she has to admit to herself and to him, that she still loves him as much now as she ever did. Adrian is determined to get it right this time. Ruth is his destiny, and he more convinced of that now than ever. However, Isaac Bronson, is convinced that there’s another kind of destiny waiting for Ruth, if she’d just get out of her own way, open her eyes, and see it.

Books similiar to Without A Song To Sing may be found in the categories below: